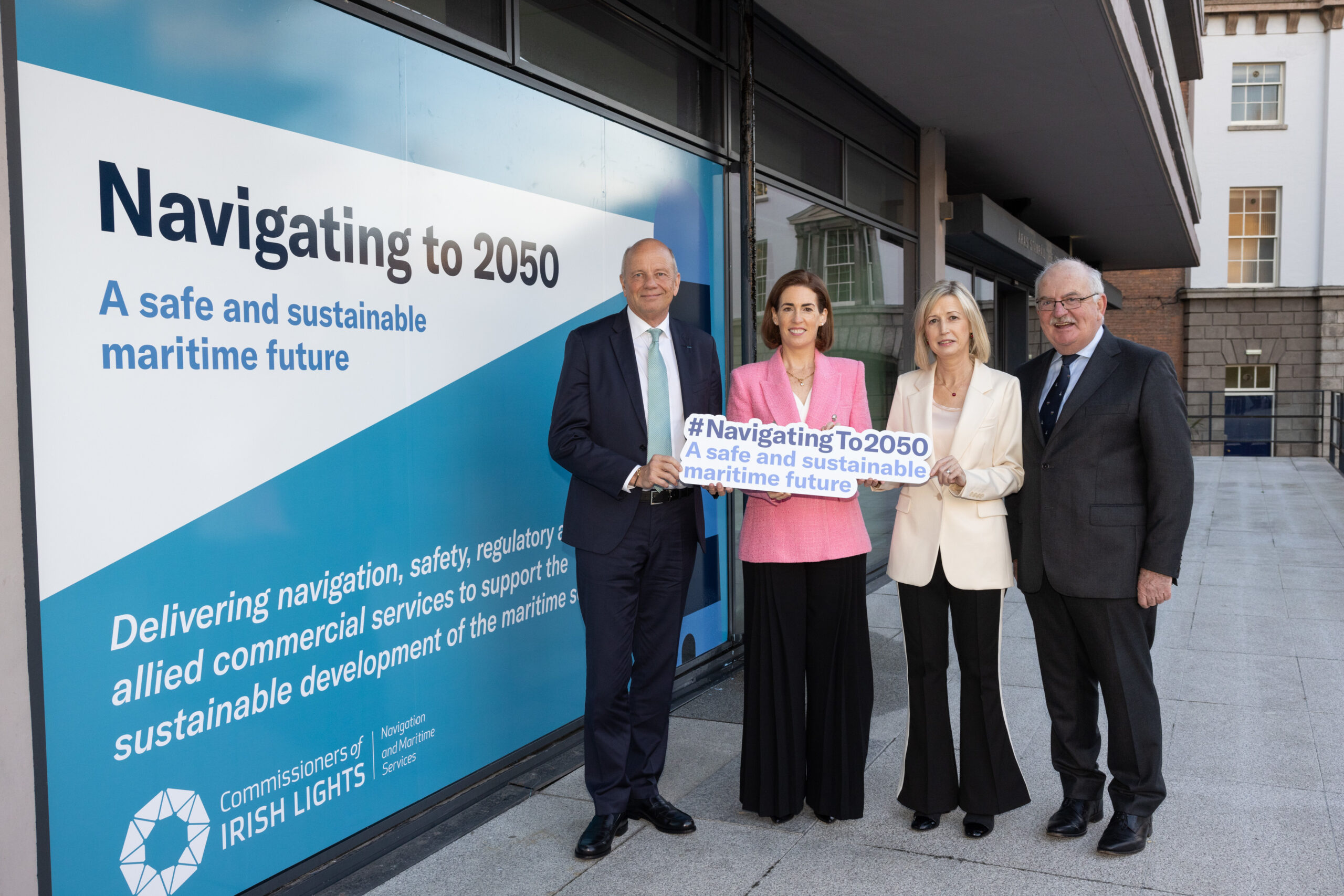 A safe and sustainable maritime future

Safety and sustainability are central to the maritime sector in Ireland and internationally. That is according to CEO Yvonne Shields O’Connor who said Irish Lights was delighted with the attendance and engagement at its ‘Navigating to 2050 – A safe and sustainable maritime future’ event in Dublin Castle on 15 / 16 November.

She commented: ‘We had over 300 participants, most of whom attended in person, and 34 speakers and panellists from Ireland, Europe, Asia and North America.  Our speakers represented an impressive range of expertise in the public and private sectors of the marine world from innovative shipping and tech companies to European and International regulatory and representative bodies.

‘Bringing these leading experts into the one room created a platform for concrete and constructive engagement on major maritime safety and sustainability issues. These included securing supply chains, use of alternative fuels in shipping, safe planning for wind farms, port infrastructure and development, autonomous vessels, digitalisation and education and skills to meet the needs of the future.’

The conference was officially opened by Ireland’s Minister of State at the Department of Transport, Hildegarde Naughton TD.  She said the conference went ‘To the heart of the challenges and the opportunities facing the Maritime sector and indeed the wider economy in the medium term.’

Minister Naughton also referenced the role that the Commissioners of Irish Lights, along with its sister organisations Trinity House and Northern Lighthouse Board, play in the important work of the International Association of Lighthouses and Marine Aids to Navigation or IALA. Minister Naughton announced, in the presence of the Association’s Secretary General, Francis Zachariae, that she had brought a memorandum to Government (9 November, 2022) with a view to the ratification of the IALA Convention in early 2023.  The new Intergovernmental Organization which will result in the coming into force of this Convention will be well-placed to maintain and improve global navigation standards.

Minister Naughton concluded by saying: ‘Maritime safety is, and will always remain, our chief concern.’

Proceedings of the event will be found on the Irish Lights website here:

Speakers addressed the wider economic implications of the decarbonisation agenda. In particular, the conference gained an early insight into major research on how the shift to more expensive low carbon fuels will impact shipping and the Irish economy. The research, funded by the Marine Institute, is being conducted by Profession Alan Ahearne and Dr Daniel Cassidy at the University of Galway.

Professor Ahearne told conference participants that over 90% of goods (by volume) come into Ireland by sea, so as an island Ireland is very dependent on marine transport.  He said the switch from fossil fuels would not have any major effect until 2050, and by then it will reduce gross value added (GVA) economic productivity by almost 8%.  He said EU regulations on low carbon fuel use by ships will have a “moderate” but not “dramatic” effect on the Irish economy.

Paul Little, CEO, City of Glasgow College and Chair of UK Shipping Skills Taskforce opened the conference by speaking of the importance of skills and education in the maritime sector, a theme that was echoed throughout the two days. He spoke to his experience managing a world leading tertiary institution especially in maritime and innovation. With 2000 courses, supporting 230 industries and 40,000 students drawn from 149 nationalities he had plenty of insights to offer on this topic.

In conclusion  Yvonne Shields O’Connor reflected: ‘The conference created a platform for discussion, debate and innovative thinking in the maritime sector,” said.

‘It shed light but also pointed to positive paths for addressing the challenges we face in meeting marine safety and sustainability targets. I would like to thank the Irish Lights team for their incredible hard work in pulling it together and also the many speakers and participants who contributed to its success.’